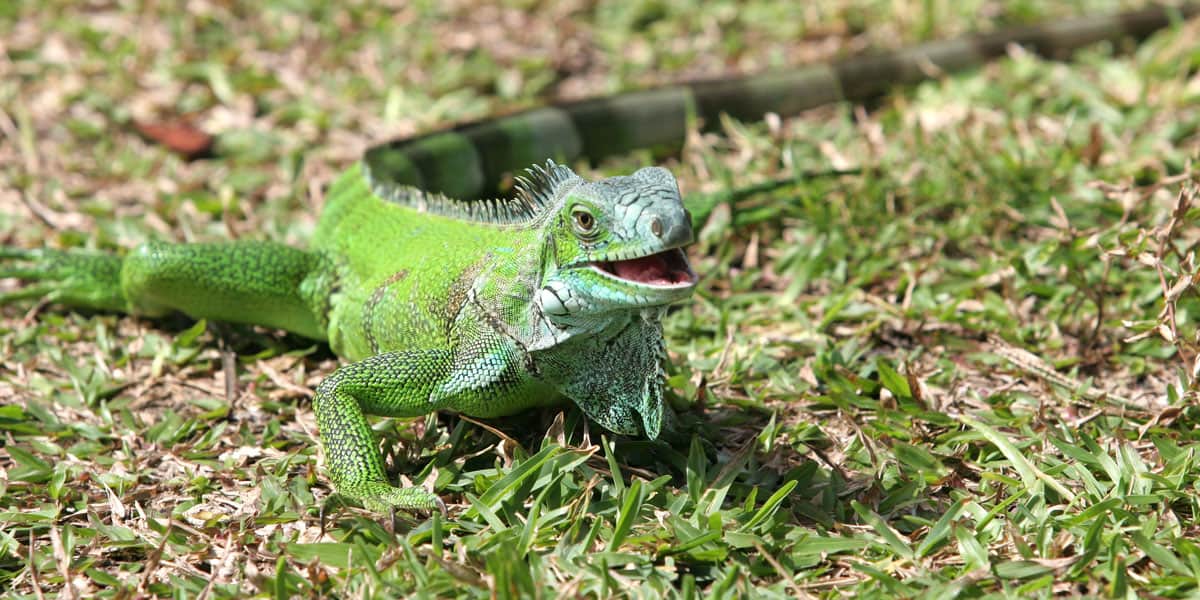 Invasive species aren’t something new or unique to Florida.

Unlike Burmese pythons and feral hogs, however, green iguanas pose a real threat to our daily life and infrastructure. While the pythons and hogs remain in the wilderness, green iguanas can be found in neighborhoods, on city streets, and even swimming down the shore.

Their feces is a health hazard and their nests destroy public and private property. Educating yourself and those in your home can help you protect your space and wellbeing.

As we’ve already covered, they’re an invasive species. But what exactly makes them invasive?

Well, they’re not native to Florida. They’re native to Central America, but in the 1960s, pet owners began releasing them into the wild and they kept inadvertently being brought over on cargo ships.

The state’s warm, subtropical climate is perfect for them, and they’ve begun to flourish as a result.

Iguanas dig burrows — mainly in February and March — to lay their eggs. These burrows, however, destroy infrastructure.

In early 2020, a dam in West Palm Beach had to be repaired after green iguanas burrowed through the soft dirt around the already-aging structure. Though experts couldn’t decipher whether or not iguanas were the main cause, they said the animals definitely made a contribution.

This isn’t the only threat to infrastructures they’ve posed over the years though. Their burrows can also erode and collapse sidewalks, foundations, seawalls, berms, and canal banks.

Iguana feces have been found on docks, moored boats, seawalls, porches, decks, pool platforms, and even inside swimming pools.

Homeowners and the like should be cautious when and if they come across the droppings since it can transfer salmonella to humans.

4. They Will Hide in Your House

No, you don’t need to go looking for an iguana in your attic. But — just like squirrels occasionally do — iguanas can hide out in the comfort of your attic from time to time.

Instead of attempting to wrangle it yourself, calling a professional might be your best option when it comes to an iguana’s safe removal.

5. They Pose a Threat to Pets

While they’re unlikely to kill your pet, they will bite or swipe their tail across your pet’s face if given the chance.

Green iguanas aren’t naturally predators (though they eat the occasional snail), but they will assert themselves at times.

Iguanas can swim and end up using canals and waterways to gain access to your backyard.

Installing a seawall barrier is guaranteed to keep them out.

7. They Eat Your Vegetation

These herbivores love eating flowers like hibiscus, bougainvillea, and orchids. They also love melons, squash, and other vegetable greens that are likely to inhabit your garden.

You can take precautions, like installing an iguana barrier around your property to keep them completely out, or you can slowly remove these kinds of plants from your yard and replace them with iguana-repelling plants.

To keep iguanas out of your yard, you can plant croton, milkweed, citrus, and even tough or thick-leafed plants.

What does this mean for you, though? As of now, iguanas populate the coastal counties of Collier, Broward, Lee, Martin, Miami-Dade, Monroe, and Palm Beach.

They’ve been reported as far north as Alachua, Hillsborough, Indian River, and St. Lucie counties, which points to them becoming acclimated to the cold and migrating further up the state.

That dam repair in West Palm cost the city $1.8 million in repairs. How much could it cost for your home?

Some homeowners’ insurance policies can cover wildlife damage to your property, but it doesn’t extend to your personal property.

One precaution you can take against burrowing is installing anti-hole barriers that prevent them from digging altogether.

10. They’re Not a Protected Species

The good news? You can eliminate any iguanas you find running amok on your property, but it has to be done humanely (iguanas aren’t a protected species, but they are protected under anti-cruelty laws).

You can trap them or kill them, but you can’t transport them to other parts of Florida.

Even if you trap them yourself, it’s best to call a professional to remove them for you. If you call one early enough, however, you won’t even have to worry about trapping them.

What Are Some Other Deterrents?

Besides installing professional-grade iguana deterring equipment, there are other things you can do to repel iguanas:

If you find that these things are no longer working, or you just don’t want to have to worry about it at all, you can call a professional to handle the job for you.

These Facts About Iguanas Could Save Your Property

Keeping these facts about iguanas in mind when you run into one (or several) could save not only your property, but also time, energy, and a lot of headaches.

The best way to prevent yourself from seeing them is to iguana-proof your property. This means no food they can eat, no trees they can climb, nowhere they can burrow.

If you do have a persistent problem though, you can always call in the professionals. Contact us today to receive your free quote and rid yourself of this invasive species for good.