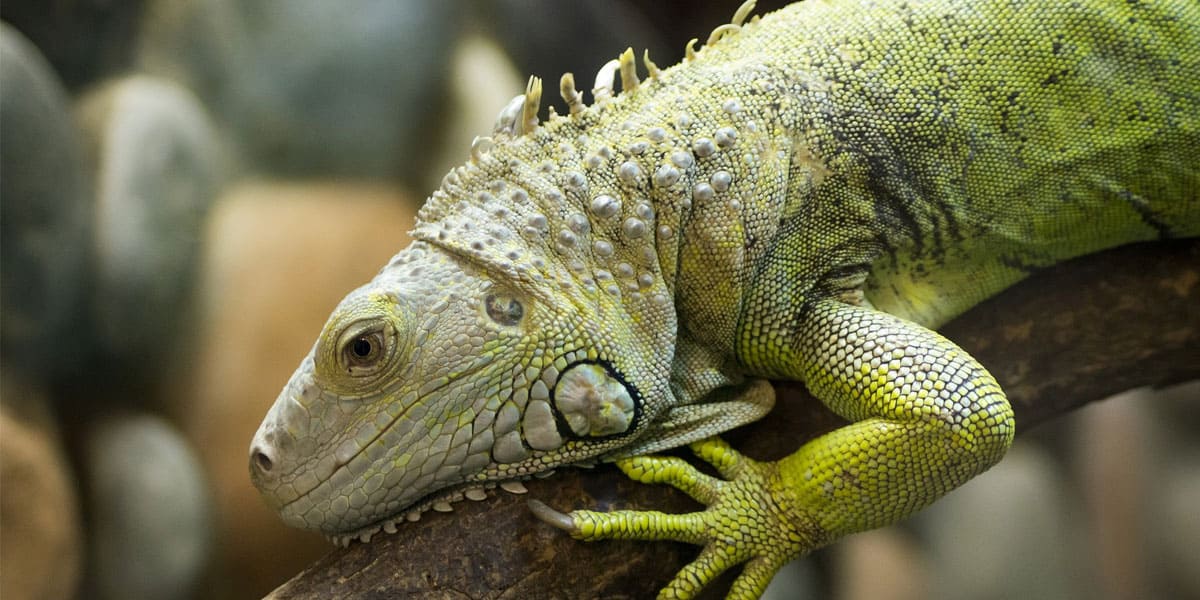 Most of the country doesn’t realize that Florida has a large, wild green iguana population. Iguanas are not native to the state but originate from Central America, parts of South America, and certain islands in the Caribbean.

They have been seen around the state of Florida since the 1960s. But over the last few decades, their numbers have grown exponentially.

While many people appreciate iguanas as pets, they are considered a nuisance in Florida. They can do considerable damage to homes and property. And the green iguana diet can also wreak havoc on the natural environment.

Looking for some green iguana facts to learn more about these creatures? If you live in South Florida where the iguana population is on the rise, you are very likely to see them near your home. Here are 8 interesting facts about green iguanas, including what you can do if they overrun your property.

1. They Hate the Cold

Take a look at the habitats that green iguanas thrive in: Central America, South America, Caribbean islands, and now South Florida. What do these places have in common?

They are very, very warm and enjoy sunny days year-round. Iguanas need high temperatures to survive. That’s why iguana populations are not very large in central and northern Florida. It just doesn’t get hot enough.

In the Miami area, as well as in the Keys, the weather is perfect for iguanas. They also need direct sunlight in order to survive. That is why you often find them out basking in the sun.

Iguanas are reptiles which means they do very well in water. They are excellent swimmers.

They can swim in both saltwater and freshwater. And if the water temperature is right, they can hold their breath for up to 15 minutes.

3. Iguanas Have a Long Life Span

Not only do they have a long lifespan, but their bodies can get very long as well. Male iguanas can grow to 6 feet long, while females are generally a bit smaller.

4. They Can Shed Their Tails and Skin

Iguanas have the ability to release their tail from their body when needed. This could be when picked up by their tail, or when they get stuck or stepped on.

This is a survival mechanism allowing iguanas the chance to escape predators. Tails usually break off cleanly at the vertebrae.

If this happens, and the iguana is still young and growing, its tail will probably grow back. However, if the tail is removed poorly, or if the iguana is too old, it might never regrow its tail.

Not only are their tails removable, but they also shed their skin at least once a year. Younger species may shed multiple times per year. When the skin is ready to fall off, iguanas often rub up against rocks or trees to get the skin off faster.

It’s true, iguanas have a third eye on the top of their heads. It’s not a normal eye, but it does carry some anatomical characteristics of their normal eyes.

This third eye is called the pineal gland or parietal eye. While it doesn’t help them see images, it can sense movement, alerting iguanas of predators who may be lurking above. Other lizards, and even some fish, have a similar feature.

6. Iguanas Communicate with Each Other

Iguanas can communicate with each other nonverbally. Rather than making noises, iguanas bob their heads. They also move the flap of skin under their necks called a dewlap.

Aggressive head bobbing or tail whipping is a sign that iguanas are upset and you shouldn’t approach them.

Extending their dewlap can be a sign of greeting. Males will also flap their dewlap when courting females. While they generally don’t make sounds, iguanas use their body language to communicate.

7. They Fall Out of Trees

In 2020, Florida made national news during its coldest night of the decade. Sub-40 degree temperatures effectively stunned the iguanas to the point where they couldn’t function.

In the cold, their metabolism slows down and they enter a comatose-like state. When this happens, they can’t grip branches and thus fall from their tree, laying on sidewalks, lawns, and streets.

They are still alive and are able to move again once the temperatures rise enough for the iguana’s body. This can happen anytime temperatures dip below 45 degrees.

The problem, experts are saying, is that iguanas may be adapting to the cold. This poses a threat to the rest of Florida, where iguanas do not multiply currently. As iguanas adapt to lower temperatures, they may be able to expand to establish populations throughout the state.

8. Green Iguanas in Florida: Not a Protected Species

While iguanas are fascinating creatures and serve important roles in their native habitat, Florida is not their home. Green Iguanas were only introduced into Florida about 60 years ago.

They can cause frustration to property owners, as iguanas can destroy landscaping, vegetation, and damage fences and sidewalks. They also pose a threat to many native species as they eat plants and snails that are important members of Florida’s natural ecosystem.

As such, green iguanas are considered a nuisance. They are not protected by law, except under animal cruelty laws. Residents can humanely kill iguanas on private property at any time throughout the year.

Be advised, you cannot capture iguanas from your property and release them elsewhere. They must be killed in order to be removed.

If you have an extensive iguana population at your home or business, you can have Iguana Control evaluate your property and effectively remove iguanas.

Green iguanas are very fascinating and make for excellent pets if you can provide adequate conditions. There are many more interesting green iguana facts for those interested in keeping them.

However, they are not meant to roam our state of Florida, threatening our native species. If you are looking for green iguana pest control to take back your property, you can contact us today for a free estimate on humane iguana removal.